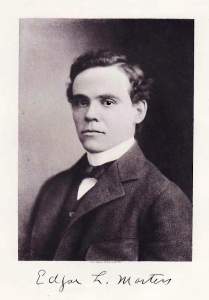 More often than not, when I read something that leaves a mark, it also leaves a trail. It takes me back to something that paved the way for me to get to that place at that moment—the arc of the reading life. When I was a teenager in the mid ’90s, just starting to come into my own in terms of my artistic interests, poetry was everything to me—reading it, writing it (badly, very badly), and naively thinking that it could change the world. There were later moments when I lost that feeling, hardened by the cold facts of the real world. But as with most things, the pendulum swung back in the other direction, and I found a middle place. Poetry can’t change the world, but it was enough that it could change my world.

The first time I picked up a copy of Edgar Lee Masters’s Spoon River Anthology (1915), I didn’t really know what to make of it. The book was in the poetry section at my local library, but it was different from what I’d been reading throughout my tween and early teen years (Frost, Dickinson, the usual suspects). The first thing that came to mind was a play, dialogue. The book contains just over 200 short verse pieces, each one in the voice of a separate character. But here’s the thing: they’re dead, speaking from the grave, epitaphs of a sort. 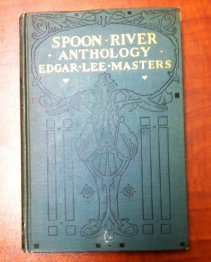 The whole conceit is set up in the opening poem:

Where are Elmer, Herman, Bert, Tom and Charley,
The weak of will, the strong of arm, the clown, the boozer, the fighter?
All, all are sleeping on the hill.

Where are Ella, Kate, Mag, Lizzie and Edith,
The tender heart, the simple soul, the loud, the proud, the happy one?—
All, all are sleeping on the hill.

One died in shameful child-birth,
One of a thwarted love,
One at the hands of a brute in a brothel,
One of a broken pride, in the search for heart’s desire;
One after life in far-away London and Paris
Was brought to her little space by Ella and Kate and Mag—
All, all are sleeping, sleeping, sleeping on the hill.

Where are Uncle Isaac and Aunt Emily,
And old Towny Kincaid and Sevigne Houghton,
And Major Walker who had talked
With venerable men of the revolution?—
All, all are sleeping on the hill.

Where is Old Fiddler Jones
Who played with life all his ninety years,
Braving the sleet with bared breast,
Drinking, rioting, thinking neither of wife nor kin,
Nor gold, nor love, nor heaven?
Lo! he babbles of the fish-frys of long ago,
Of the horse-races of long ago at Clary’s Grove,
Of what Abe Lincoln said
One time at Springfield.

From here we switch to the people. They confess, they gossip, they clear the air, they tell their stories from their own subjective point of view. When I try to convey what Spoon River Anthology is to the uninitiated, I often say it’s like a mashup of Thornton Wilder’s Our Town and Akira Kurosawa’s 1950 film Rashomon, which tells one story from four very different perspectives. But that somewhat highfalutin explanation doesn’t really do it justice. Wouldn’t it be great to have a more contemporary reference?

Few novels have had as much buzz lately as short-story master George Saunders’s debut, Lincoln in the Bardo. From page one, it became evident to me that Saunders, a favorite of mine, is also a lover of Spoon River Anthology. The novel revolves around the story of Abraham Lincoln and the death of his son, Willie, age 11. Years ago, Saunders heard that Lincoln used to go into Willie’s crypt and hold the boy’s body. The image never left his mind. Written in short vignettes, in the voices of over 150 different characters, it speaks not from the grave exactly, but from the “bardo,” a sort of Tibetan purgatory. The book is an obvious homage to Masters. As you may have noticed, Lincoln makes a brief cameo at the end of “The Hill.” As if that’s not enough of a connection, Masters also wrote a major biography of Lincoln in 1931.

I write all this to say that with all the deserved praise Saunders is enjoying (we rarely see true literary novels become #1 bestsellers), take time to read both of these texts. In no specific order. I wonder what Spoon River Anthology would mean to me if I came to it after Bardo? It’s damn near impossible to untangle the love of some books from teenage nostalgia. And thank goodness for that. 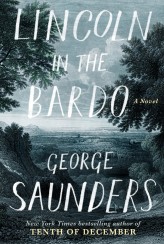 Jeff Martin, Nimrod Advisor, is the founder of the Tulsa Literary Coalition’s BookSmart Tulsa, an organization that brings numerous acclaimed authors to Tulsa every year.