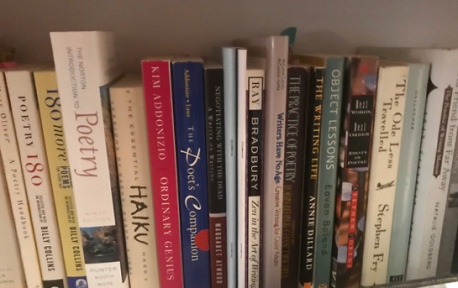 As I gear up to teach a class of adult learners about poetry, I’m revisiting what makes a “good” poem. And what makes a poem not merely good, but great?

For decades now, the “canon”—those poets and poems academics feel should be studied, presumably for their greatness—has been the subject of heated argument. Poets (and poems) wax and wane in stature: war poetry of WWI is seen as canonical, while students rarely, if ever, see poetry from the Việtnamese War in anthologies.

And while there’s certainly consensus on, say, Robert Frost and Emily Dickinson, the inclusion of other poets remains up for discussion. If you’re an avid reader of poetry—as most of us involved with Nimrod are—you’re familiar with a LOT of poets whom other folks have never heard of, even though English majors, poetry lovers, and literati types know them well. Like Marianne Moore, whose poetry I love. Or Ishmael Reed, whose poem “I am a Cowboy in the Boat of Ra” was an epiphany for me. But I guarantee most of my friends outside English academia haven’t heard of either.

When you get to contemporary poetry it’s even worse. The lack of name recognition in general circles for many of the best contemporary American poets makes you feel like you’re speaking another language when you try to discuss them: Nimrod readers and those in poetry communities will be familiar with them, but other folks? Unlikely.

Since I’ve studied poetry, poetics, and the canon for decades, I feel like I ought to be able to give a nice, succinct definition to the students who will turn up next month expecting me to know stuff. But I can’t. Because I don’t: I’ve never understood the magic of inclusion, or the drama of exclusion, myself. Why is Shakespeare more familiar than Ben Jonson, who was a better poet? And sure: Jonson is canonical, but few high schoolers will ever get him in class. Why isn’t the entire English language world intimately familiar w/Gerard Manley Hopkins, one of the best poets ever? How did Mary Oliver manage to become a popular contemporary poet—almost an oxymoron—(although she certainly deserves it)? And how did we lose Edna St. Vincent Millay?

Canon:
A list of authors or works considered to be central
to the identity of a given literary tradition or culture.[1]

These and other questions about poetic worth are the stuff of literary conundrums. When you have only 12 hours of class time and you know at least half of those will be devoted (with pleasure) to discussing the poems, how do you justify the often arbitrary, highly personal choices made? What should folks read? How do you make sure the wide diversity of poetry is adequately addressed, while still giving attention to the canon?

Many of the participants in this class will have little or no familiarity with poetry. If other classes are any indication, there will be engineers and historians and biologists and doctors and counselors and all manner of professionals. There also will be women who have never worked outside the home and retirees bored by endless hours of alone time. Now, you and I—as fluent readers and lovers of poetry—know that there is poetry that will speak to each of those situations. And speak fluently, in poetry’s own inimitable way. But since I don’t know the class demographics before I have to make a schedule, I have no idea who needs what poems. In that befuddled case, what would you suggest I offer?

When I took this thorny problem of the canon to the hive mind of Facebook, I was met with the kind of responses I should have expected: It’s what lasts. It’s what university professors say it is. It’s historical context. Sigh. Those just don’t work for me. And maybe they would work for my students, but it’s hard to teach something you don’t believe. I’m sure to slip up and say something flip about the whole canonical mess.

Perhaps the reason I like the above definition from the Poetry Foundation is that it leaves the door open to the problems I have with the whole canon thing.

This includes the highly problematic (for me) exclusion/elision of excellent voices—the historical context named—that accounts for why Robert Hayden is considered African-American lit, which is still pretty much non-canonical, although certainly there are crossover exceptions. Hayden and other black/brown/gay/activist poets didn’t and/or don’t “fit” with various readings of the American cultural and literary identity. Not even Library of Congress status can change attitudes quickly. The changes to the identity of American literature brought by social movements and the inclusion of these other, traditionally excluded voices remain highly problematic for far too many of the canon-makers. But textbooks are changing. Because, as Henry Louis Gates argues, “You have to have a canon so the next generation can come along and explode it.”Or perhaps it’s as simple as that canonical master T.S. Eliot said (here I’ve paraphrased): these are the poems that touch on human experience. The canon changes as we recognize the value of different experiences.

And that’s probably where I’ll begin on the first day of classes next month. What do you think?

Britton Gildersleeve’s creative nonfiction and poetry have appeared in Nimrod, Spoon River Poetry Review, This Land, and many other journals. She has published three chapbooks and was the director of the Oklahoma State University Writing Project for twelve years.

2 thoughts on “What the heck is the canon, anyway, and why should my students care?”