As part of the launch of our Spring/Summer 2018 issue, Let Us Gather: Diversity and the Arts, we talked with contributors about their work in the issue and more. The following interview is part of this series. Please visit our website to see the complete list of contributors to Let Us Gather, to purchase the issue, or to subscribe. 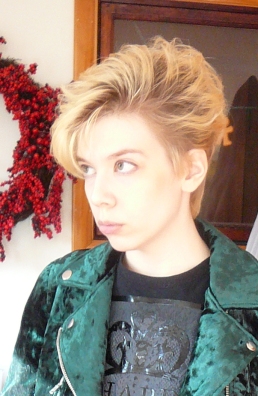 Nimrod: Your winning story is set in our world, but in the future after some sort of apocalypse, and it deals with themes of oral tradition, fairy tales, and more. What inspired you to write “Major Tom”—have you always been drawn to fairytales?

C.C. Lewis: I’ve enjoyed fairytales from a young age, particularly a 1940s anthology series of multicultural stories called Book Trails, among others. Like many children, I was drawn not only to the whimsical side but also to the dark undertones—and sometimes overtones—present in fairytales, despite the fact that the dark side of most modern tellings are watered down compared to the originals. In my experience, fairytales aren’t something one necessarily grows out of, and it occurred to me that maybe we discover more “adult,” non-traditional fairytales as we grow older, especially in popular culture. In the case of my story “Major Tom,” David Bowie’s “Space Oddity” is a song that greatly appealed to me as both a child and an adult, and I’ve been familiar with it for practically as long as I’ve been familiar with traditional fairytales. It interested me to consider the idea that other people might have had similar experiences: to some, the fictional character in a rock ‘n’ roll hit has become a household name, as well-known to them as the likes of Snow White and Sleeping Beauty.

It was this notion that partially inspired me to write the story, along with a desire to explore the nature of oral tradition and folklore. My mother’s side of the family, from the Appalachian mountain region, passed down rhymes and riddles through at least four generations, so that’s also a phenomenon that is of particular interest to me.

These concepts led me to the idea that the figures of today’s pop culture might become the fairytales of the future. And in the case of a creation as intriguing as Bowie’s Major Tom character, I hope they do.

Nimrod: Do you find that music often influences your writing?

Lewis: Yes, it absolutely influences my writing and has since I first started to write creatively. Even as a child I created comics involving members of real-life bands I listened to; as an adolescent I began to incorporate musical elements into my short stories. My first published story was named after the song “Green Onions,” and I recently completed an unpublished novel where the central narrative incorporates my knowledge of and passion for music.

When I read Nick Hornby’s High Fidelity as a young adult, I was inspired by the way the author included his own knowledge and love of popular music in creating his characters and themes. That novel shows how artfully music can inform a work of fiction and illuminate larger concerns and aspects of human nature.

At times I listen to music while writing, or I might have a specific song in mind when working on a scene. Occasionally I have tried to capture the mood of a song in the atmosphere of a scene, but I may or may not actually name the song in the piece.

Because music and writing are such important and vital parts of my life, it’s natural to me that the two so often intertwine.

Nimrod: How many times do you usually revise a story?

Lewis: I tend to go through several drafts, but the nature and extent of the revisions completely depend on the piece. Some changes might be limited to only a few sentences, while in other cases I might revise the work in a more drastic way.

Nimrod: What are your 3 all-time favorite books?

Lewis: Among many other favorites, High Fidelity by Nick Hornby, The Goldfinch by Donna Tartt, and The Amazing Adventures of Kavalier & Clay by Michael Chabon.

C.C. Lewis’s work has appeared in the Berkeley Fiction Review, from which she won second place in the 2016 Sudden Fiction contest. She was also a finalist for North Carolina Literary Review’s Doris Betts Fiction Prize in 2017 and 2018 and has received honorable mentions from Glimmer Train. She has a Bachelor of Arts in English literature and currently lives in western North Carolina.