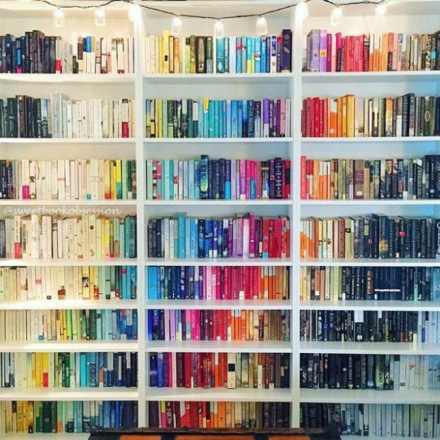 I HATE books sorted by color. Yuck! How do you find what you want?

This may seem an odd start for a post about poetry anthologies. But bear with me—here goes: For the past couple of semesters, I’ve been looking for an anthology for poetry classes. There are a million, right? So when I first couldn’t find one I like, I figured, It’s me. I’ve been out of the loop for a few years, and I just don’t know where to look. (Note to self: that could still be at least part of it.)

So I asked friends, the many many friends and colleagues I know who read/write/teach poetry. And they obliged with various suggestions. These were better, but still not what I’m looking for (the search continues).

It doesn’t seem right to me, that in this day of online publishing and of an emphasis in the “academy” (re: that semi-hermetically sealed, but oh-so-necessary university milieu) on diversity, there aren’t many readers like I want my students to have.

I have the following parameters, which don’t seem that difficult:

What I see happening instead is that many excellent poets are no longer included in either mainstream or new anthologies. A poet I love, Pulitzer Prize winner Mona Van  Duyn, shows up only in a relatively old anthology I won—my beloved No More Masks!. Teaching a class of former teachers and university professors, I realized not one had heard of her. They all agreed that her poem “Late Loving” was the best poem we’ve read so far (two weeks in). But Van Duyn is, effectively, silenced as a writer today.

This kind of segregation means that many readers continue to think that diverse poetry is somehow not canonical. There’s an implicit assumption on the part of far too many readers that what doesn’t get in isn’t as good, somehow. That’s part of the problem with segregated content. I use the word intentionally: it’s an (ostensibly) “separate but equal” treatment that has never been acceptable, often not even to those included in both camps. My heroine Elizabeth Bishop refused to be included in No More Masks! because of the segregation implicit in the edition, both first and second[1].

Back to the color-sorted books. If we have everything sorted according to some plan that doesn’t work for the majority, but looks good, then the system is a failure, as is the current one, at least for many of us.

Ultimately, it’s not simply readers who suffer from this over-categorization of poetry, this binary boxing of new vs. old, white vs. brown, male vs. everything else. The entire study of poetry, from the ground up, is deeply flawed by such inclusion/exclusion. Yes, we need our roots. We need Chaucer, Shakespeare. We need Whitman and Dickinson and Roethke and Levertov. We also need Naomi Shihab Nye and Natalie Diaz and Alberto Ríos and Ocean Vuong. We need the almost forgottens, like Mona Van Duyn and Countee Cullen, as well as the brand-new voices of poems ghettoized to “new diverse voices.” We need voices from our long, complex, fractious history of rhyme, meter, and image to fill the pages of anthologies with all kinds of music.

And we need it for a reasonable price. In a book. ASAP. Please.

Britton Gildersleeve’s creative nonfiction and poetry have appeared in Nimrod, Spoon River Poetry Review, This Land, and many other journals. She has published three chapbooks and was the director of the Oklahoma State University Writing Project for twelve years.